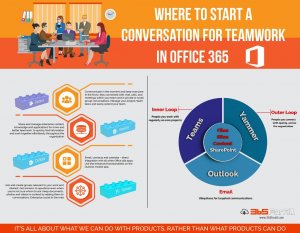 Ever since Microsoft introduced Groups to Office 365, the customer reaction has largely been, “huh?” Customers would ask me, “what’s up with these Groups?” Then Microsoft bought Yammer, which seemed to make the confusion worse. And with the introduction of Teams, customer reaction has been even more confusion. Let’s see if we can sort things out. What’s the best tool to use in a given situation?

In the Beginning, There was Email

Let’s start with the one communication tool we all use the most: email. What are its benefits and drawbacks?

Email is the tool we love to hate. And when I’m working with customers on how to more effectively communicate and collaborate, communicating less is never a viable option. What we need are tools that are purpose-built for the kinds of collaborating we’re trying to accomplish.

Microsoft Groups get a brief mention here. But Groups are not a solution as much as they are a building block for tools I’ll describe below. The one positive thing about Groups is that they are not email distribution lists.

A Time for Teams

Teams are built on Groups. Think of Teams as the “above the waterline” part of Groups.

The teams we work in are often internal to our organization, but this isn’t always the case. Sometimes our team includes a consultant, or a donor, or a grantee.

So, when should you choose Teams for collaborating? When you have a tangible objective to accomplish. We use Teams to get these weekly updates out. Teams are also a good choice for creating a sense of community in organizations that are smaller. If you have less than a hundred employees, Teams would be a good way to share content and collaborate. Employees that like to organize lunchtime bike rides could use Teams for this activity.

Some people would argue that Yammer can do everything Teams can do. They’re largely correct, but that misses the point.

Think of Yammer as the organization’s water cooler. You can (virtually) gather around to learn about people, events and activities. This is especially true for larger organizations. If there are a lot of employees, or several locations, or very large departments, it’s likely that you won’t know everyone in the organization. Here is where Yammer shines.

For instance, we have a large customer, the Asia Foundation, with many offices throughout Asia. They use Yammer to share news about what’s going on locally. They also use Yammer to create a sense of community for members of one department that are spread across multiple locations.

As well, Yammer is also useful for organizing long-lived conversations. For instance, if your organization is working on an initiative that will last all year, Yammer is a nice way of organizing the content, so you can go back and see how the thinking on a topic has evolved.

Finally, Yammer is also handy for organizing a large project team, especially one that includes participants from outside the organization. It’s easy to integrate them into the group and maintain good security. Microsoft uses Yammer to keep its partners up to date.

Pulling It All Together

Here’s the TL;DR version of the story.

Here’s a nice article on this from Tony Redmond.