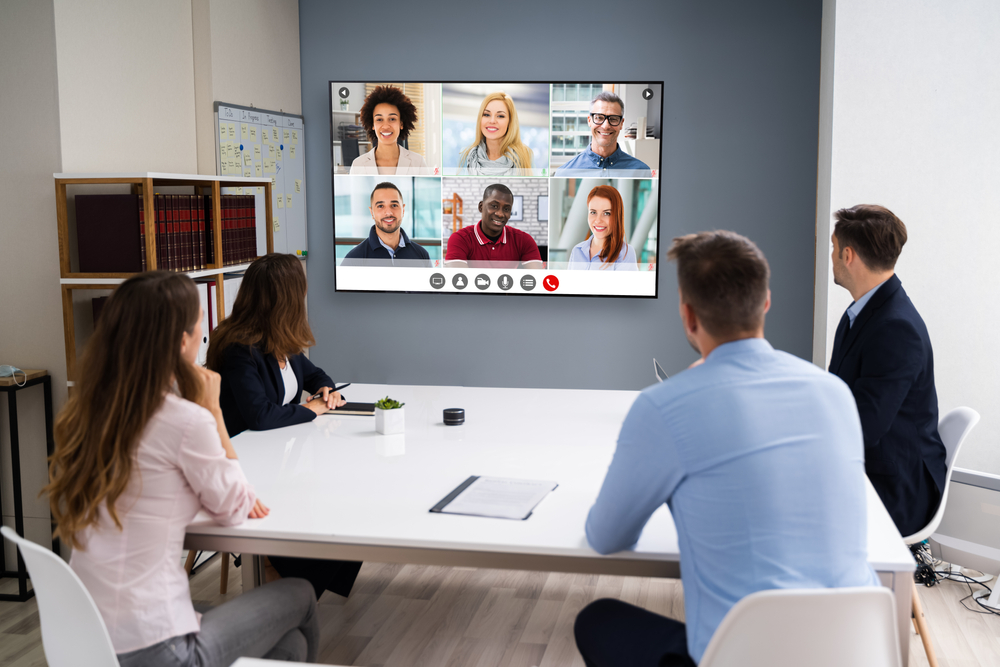 Every couple of months we like to fill you in on the newest features being unveiled for Microsoft Teams. If you missed any of them, you should check out these from January and March.  (There are many more; just go to our blog home page and search “Teams features”.) Today I’ll tell you about a handful of new Teams meetings features that Microsoft has recently announced. One is available now; the others are rolling out this summer.

Their focus with these particular updates is on maintaining the engagement of all  meeting attendees, no matter where they are joining from. Microsoft is taking into account the fluidity of the workplace right now, as meetings are made up of staff working from their individual offices, together in shared conference rooms and many still at home. Some new features technically improve the hybrid meeting experience, such as with expanded video display capabilities.  Other are designed to keep those still working remotely as engaged in the meetings as those back in the building.

You don’t always need to be speaking to show your engagement in a meeting. Remote participants can now promote their presence in the room by using Live reactions in Teams Rooms. Here’s how: While in a meeting at your desktop, hover over the “Show reaction” icon in the upper-right of your screen. (See image below.)  As you do so, along with the “Raise hand” option you will now be able to Like, Love, Applaud and Laugh.

To share meeting reactions — or raise your hand — when you’re on your mobile device, tap the ellipsis in the meeting controls along the edge of the screen for the Live reactions menu.

A few notes: Live reactions will be visible when using filters and backgrounds and in breakout rooms, but not in Together mode or large gallery view. They are also not yet available in the web version of Teams. Finally, the meeting organizer has the option to disable live reactions in the participant settings.

During Microsoft Teams meetings, chat has become a lively space for conversation and idea-sharing. It gives everyone a place to participate without jumping in verbally. But it can sometimes be a bit overwhelming to pay attention to everything – video feeds, presentations, and chats – at the same time. Additionally, participants need to manually open a chat window in order to view the chat screen.

Microsoft has solved this problem: Thanks to the new chat bubbles feature, chats sent during a Teams meeting will now surface on the screens of all meeting participants, making the chat more central to the conversation. Here’s what that looks like: 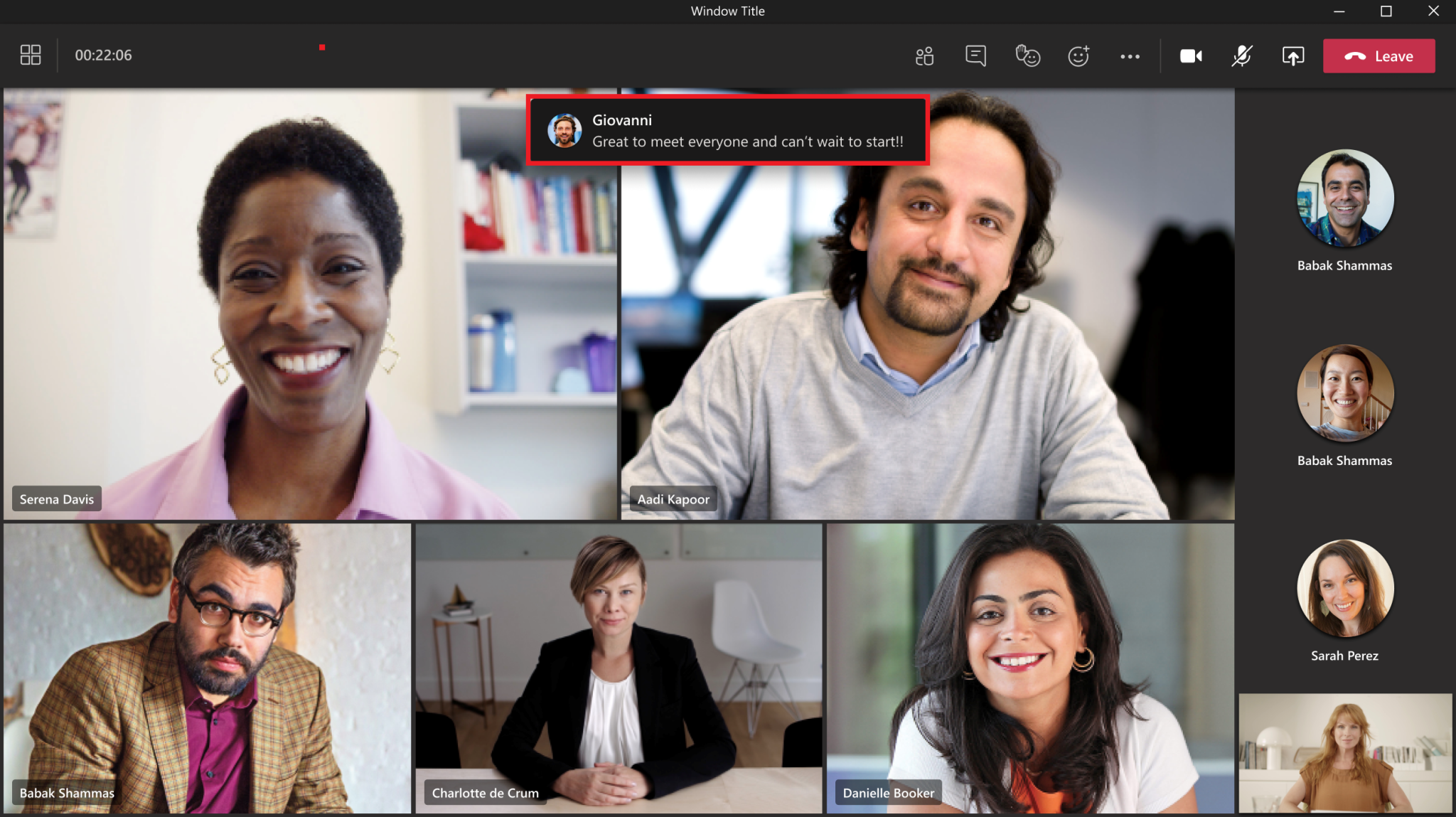 The feature will be enabled by default, but participants can choose to disable it if they want to from the  settings section of the meeting menu. The new chat bubbles feature will be rolling out in the second half of this month.

Move up to the front row

Over the past year, since we were all at home, we were on equal footing in our remote meetings. Everyone was in their own little video “box”, formatted like the opening credits to The Brady Bunch or the celebrity panelists on Hollywood Squares. But while some of us are now back in the office, gathering for meetings in person, many of us are not. So, to create a greater sense of connection between remote and in-person participants, Microsoft has announced a new meeting layout soon rolling out called front row. They have moved the video gallery to the bottom of the screen so in-room participants can see remote colleagues face-to-face across a horizontal plane, as if they were all sitting in the front row.  (Something that would surely bring a smile to Bob Uecker’s face…  And with that, I’ve definitely exceeded my quota of nostalgic t.v. references for one post!)

Helping all participants feel as though they have a true presence in a meeting “room” – whether that room is physical or virtual –  is critical to delivering an inclusive hybrid meeting experience, according to Microsoft. So beyond the front row feature, they have also been developing a new video layout that maximizes screen space. When content isn’t being shared, you will soon be able to expand the video gallery across multiple displays. With an increased screen space, video of remote participants can be seen more clearly, bringing greater attention to those folks who have joined from home. 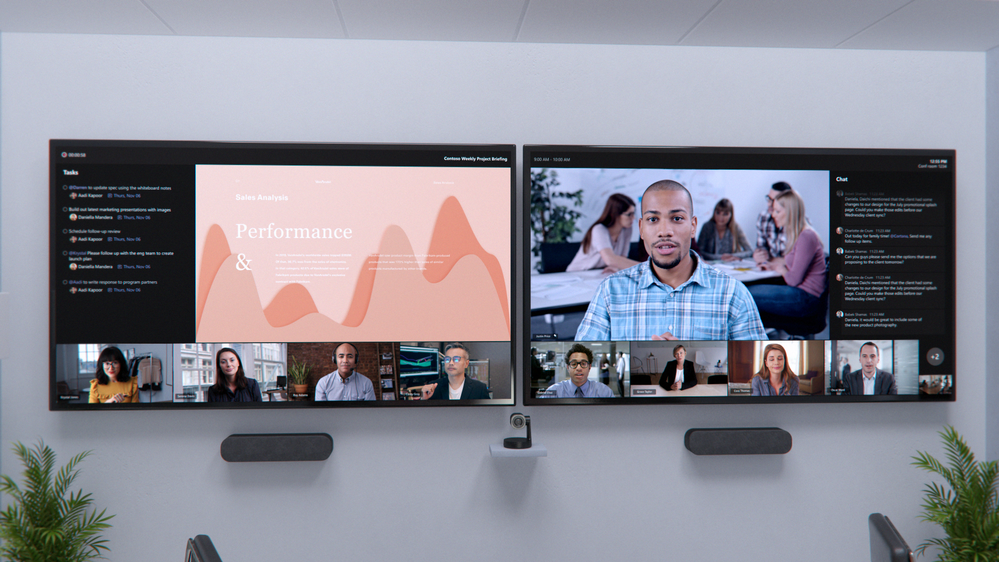 These new Teams meetings features are just a few of the things Microsoft has been working on to improve our collaborative experience.  Check back in throughout the summer for more of our “new Teams features” updates!